Nevada citizens are being charged $12.5 million every two years by private clubs 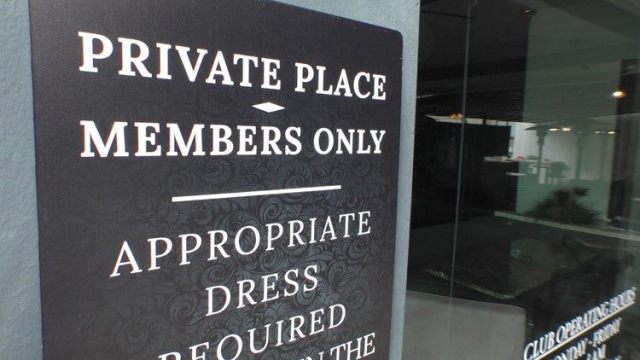 Every two years, the residents of Nevada pay an average of $12.5 million of public money and the beneficiaries are two private organizations that are themselves tax exempt.

Yes, $12.5 million that does not benefit our education system or support our medical system and does not help those less fortunate.

In fact, the $12.5 million does not buy a single tangible item. So how is this money spent?

Perhaps, by now, you have guessed that I am talking about the Republican and Democratic parties and the upcoming primary election. According to the website www.openprimaries.org, The average cost for a state to hold a “closed primary” election is $12,513,317.95. Nevada is a closed primary state in that only those voters registered as either Republicans or Democrats are allowed to vote for their party members. Of course, those that are not registered to those two parties are allowed to vote for about six non-partisan positions.

Primary contests may resemble conventional public elections in nearly every way — down to the polling places and the neighbors serving as judges — but they are, in fact, private functions. Technically, these are not elections, but instead, a means of selecting candidates that each party wants to run against other political contenders.

However, political parties are private organizations. They make their own rules for how they nominate candidates — how they select delegates to conventions and what those delegates may do. These organizations are free to do what they like with the results both locally and in the aggregate and take their chances that voters will go along.

The big question is, why are the citizens of Nevada having to foot the bill for these private, non-profit political organizations to pick their candidates?

In essence, these two parties are private clubs for which you must be a member to vote in the election of officers. Like all other private clubs, they should have to pay to print and mail election ballots to each person registered to their party and pay an independent party to tally those votes.

Yes, I know that most people consider the expense of a primary election as part of the democratic process. But I ask you, is it really democratic to eliminate the majority of candidates in a closed voting system before the general election when everyone is allowed to vote for whomever they want?

While the Democrats lead the Republicans by 61,629 registered voters, the real race lies in convincing the 393,557 nonpartisan and other independent voters to vote for whomever the two parties select to be their candidates.

Nationally, the number of Americans that identify as political independents is even more startling at 42 percent, while only 29 percent identify as Democrats and 27 percent identify as Republicans. For a more detailed breakdown of these numbers, you can read the full Gallup report of January 8, 2018.

Unfortunately, despite the growing trend toward independent voting, the U.S. political system is still entrenched in a two-party system whereby, if you are not a Republican or a Democrat, you have very little chance of succeeding politically. And within each party, if you are not one of the favored candidates you also have very little chance of going forward, even in your own party. Donald Trump being the exception to that last statement.

As such, participation in the election process, particularly local and mid-term, is falling. Part of the apathy during elections is the fact that many people don’t feel that their vote counts or that their favorite candidate can get elected against politicians that are heavily backed by political organizations and PACs.

However, that could change if we change the way we elect our representatives and one of the alternatives is through the use of Ranked Choice Elections.

In the Ranked Choice Election, anyone who wants to run for a particular office can run, and the voting public can vote for them as either their first, second, or third choice candidate. The winner is the person that receives 51% or more of the votes. If there is not a 51% vote getter, then the person with the highest number of first and second choice votes that puts them over the 51% threshold, is considered the winner.

I fully understand how important it is for both the Democrats and the Republicans to fight to keep the election process status quo. Both parties want to keep a stronghold on their political ideals and agendas. Even more important is to elect candidates who, once in office, will hold to the party line when items come up for a vote.

However, just think about how the dynamics would change if a third of the politicians holding office were independent of the two main parties. How many more political standoffs could be avoided and how many more non-partisan bills would be passed?

At the very least, Americans need to stop paying for the Republicans and Democrats to select the candidates that they wish to run against other political contenders. Eliminate partisan primary elections.

A word about the author:

My name is Craig A. Ruark, a freelance writer, and journalist. I am not, in any way, a political analyst or reporter. However, since my 18th birthday, when I first registered to vote, I have steadfastly kept abreast of the platforms of the politicians and the issues of the day.

From 1973 until 2008, I was registered as a member of the Republican Party and I voted in every election whether it was municipal or national. However, I voted for the individuals and the issues and not always straight party tickets.

In 2008, the Tea Party, in my opinion, kidnaped the Republican Party and moved it to the extreme right, leaving me standing near the center of the political spectrum. And while the Democrats did move more toward the center, I became disenchanted with both parties, so I changed my voter registration to Non-Partisan, and remain so today.

I don’t believe in party ideals, I believe in independent thinking and what is good for all people.

Craig A. Ruark is a freelance writer, journalist, and marketing and PR professional. Craig started his professional career in broadcasting; as a radio announcer, news reporter, and advertising account executive. He wrote and produced radio and television commercials, public service announcements, and gathered news stories. Since 2014, Craig has worked as a freelance writer providing newsletter and blog content for clients in various industries. From May 2018 to March 2019, he was the editor of bizNEVADA Magazine and has been a contributing writer for the Las Vegas Business Press and Las Vegas Review-Journal, producing over 200 in-depth articles on a wide range of subjects including technology, medical advances, economics, and local businesses. He has also interviewed some of Las Vegas’s most prominent individuals and written over two dozen business profiles. Craig is an avid fitness participant, sailor, SCUBA diver, enjoys singing Karaoke, listening to jazz, and is working on his next book.
View all posts by craigruark →
This entry was posted in Politics, Uncategorized and tagged Democrats, Non-Partisan Voting, Primary Elections, Republicans. Bookmark the permalink.

1 Response to Nevada citizens are being charged $12.5 million every two years by private clubs